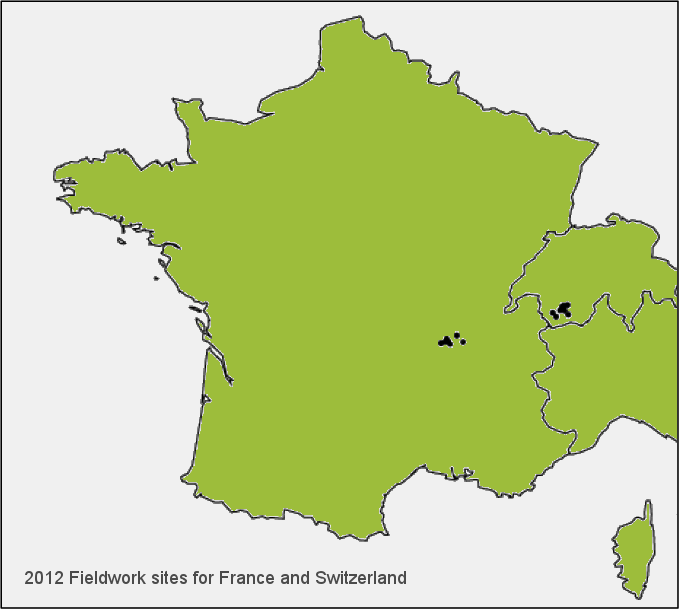 As with the Athabascan case, new speakers of Francoprovençal are very active online, but struggle in traditional domains.

Fieldwork was conducted in les monts du Lyonnais in France and the Canton of Valais in Switzerland between July and September 2012. During the interviewing phase of the fieldwork, I very soon became aware of the tensions that exist between native speakers and new speakers.

While in those sites explored in France there was a willingness on behalf of native speakers for these varieties to be acquired by younger generations (though questionnaire data suggested that this support stopped short of including Francoprovençal in the school curriculum on a man datory basis), in Valais older native speakers were noticeably recalcitrant to learner speech:

[We don’t like people who speak our patois badly, we prefer to speak with real patois speakers and to speak either French or our real patois, but not to massacre the patois].

These views were not only expressed to me in interview, but in general are made overtly clear to those younger speakers that are actively trying to acquire and practice the language:

[Often [the native speakers] they laugh if we make mistakes […] they are harsh with us the younger ones who don’t speak as well].

Why it should be the case that communities in Lyon are more open to the prospect of new speakers acquiring the language than in Valais is not immediately clear. Anecdotally, the answer might lie in the fact that levels of vitality are generally higher in Valais than in les monts du Lyonnais.

Might it then be the case that, as the ‘tip’ towards the dominant language nears completion, native speakers realize all too late the risk of losing their language forever?

For new speakers living in these communities, this can be very frustrating: they have not had the same opportunity to grow up acquiring the language in the same way as their elders did. Their efforts to learn and to reconnect with a distinctive regional identity have taken place entirely in an education context, rather than through inter-generational mother-tongue transmission.

These sentiments are echoed in Dorian’s response to Ladefoged’s ‘Another view of endangered languages’ (1992) in the context of East Sutherland Gaelic: ‘some of the youngest members of their own kin circles have begun to berate them for choosing not to transmit the ancestral language and so allowing it to die’.

As Dorian has said elsewhere, perhaps it would be better, then, if these puristic attitudes towards language were better spent being channeled ‘into forms which are useful rather than harmful’, before it is too late.

-- -- 2015. Variation and change in Francoprovençal: A study of an emerging linguistic norm. Unpublished PhD Thesis: Department of English Language and Linguistics, University of Kent.