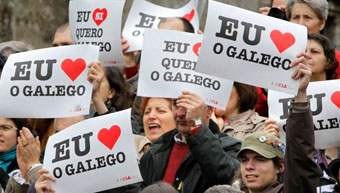 The research activity was built around multiple instances of collaboration and knowledge exchange with Fernando Ramallo and his research team at the University of Vigo.

As an active member of the New Speakers Network through my participation in Working Group 1 - New Speakerness in the Case of Indigenous Minority Languages, I believe that this STSM centred on Galician sociolinguistic context will contribute to scholarly debates on both ‘new speakers’ and societal multilingualism, and therefore advance the goals of COST Action IS1306.

Over the course of the mission at the host institution, I shared my findings with other members of Fernando’s research group. Above all, by undertaking this mission at the University of Vigo, I worked closely with him and his team which enhanced my field research experiences.

We had our first meeting in Vigo over a lunch in November 2014 where we discussed questions for the focus group.

The questions were divided in three sections:

We decided that each focus group should contain at least four couples who had children studying in pre-primary or primary schools.

While the focus group in Santiago de Compostela centred on parents who send their children to co-operative funded Galician speaking schools, the one in Vigo had parents from both cooperative funded and public schools.

With Fernando’s help, I conducted the first focus group in Santiago at the end of November. New-speaker parents from two co-operative funded Galician speaking schools such as Raiola and Semente Compostela participated in the focus group.

The second focus group took place in Vigo in early December. Parents, both couples and single parents of children from cooperative funded and public schools took part in it.

Both focus groups were carried out successfully and the participants expressed their views clearly about their language practice at home.

A preliminary discussion on the collected data illustrates that language requirements of the individual (micro), the community (meso) and the country (macro) may differ in a bilingual society as everyone has his or her own language practices.

One of the major aims of my research is to investigate how individual agency (relating to parents) interprets language policy on the ground.

A careful listening of the focus group data further reveals that language policy at the individual level, like all other domains of language policy, includes aspects of practice, ideology and management.

Individual language policy (ILP) can provide a valid description of the following:

Results from this STSM will be presented in the next COST meetings during 2015.

Anik Nandi (India) is a final year PhD student at the Department of Languages & Intercultural Studies (LINCS) of Heriot-Watt University (UK). He is also external research fellow at the Instituto da Lingua Galega (Spain) and in the UNESCO Chair on World Language Heritage at University of Basque Country (Spain). His research centres on Language Policy and Planning, language revitalisation strategies, minority issues, and Galician studies.